I am Jocelyn Andersen, author of, Woman Submit! Christians & Domestic Violence. I mailed a copy of my book to the Eagle Forum office some months back. I do not know if you received it or not. I also contacted, via email, an Eagle Forum leader and asked her to forward the email to you. It contained my comments about what you were publishing concerning domestic violence, along with a plea for you to reconsider your position on the issue. I included a PDF copy of the book in that email just in case you did not receive the print copy. I have never received a reply to either communication.

Domestic Violence destroys families. Women are dying because of domestic violence. Yet, for some reason, you have chosen to embrace and promote the cause of blatantly anti-female and anti-family organizations. You use the tremendous voice God has bestowed on you through Eagle Forum in foisting these off on political and religious leaders as PRO-FAMILY advocates—which they most decidedly are not.

Groups such as, the American Coalition of Fathers and Children (ACFC) and Media RADAR (Respecting Accuracy in Domestic Abuse Reporting), are not pro-family. A mere glance at their websites and at the sites of other so-called “family or father's rights” groups who look to them for leadership and support—hundreds of them—reveals an agenda that is dedicated to basically one thing—proving that most women are liars and willing to manipulate the legal systems, and in the process, destroy their husbands and families, in order to get what they want.

Many of these “father’s / family rights” websites (Media RADAR topping the list) are admittedly dedicated to proving that most allegations of domestic violence are false, and that it is not a real problem within our culture—and if it is, these men are claiming that it is the women who are the primary aggressors and instigators of family violence.

You say these organizations have hundreds of surveys proving that women are the primary aggressors and abusers while men are the real victims?

Department of Justice statistics do not back up the results of these surveys. The facts and figures cannot be altered. The injured and dead remain the injured and dead. More than 3 dead women every day—1400 dead women a year—testify to the fact that domestic violence is indeed a destroyer. Mark B. Rosenthal wrote the truth about "surveys." While writing for Media RADAR, he said, "With a U.S. population of 297 million, it's possible to cherrypick a small non-representative sample to prove nearly anything."

The objective facts are these, 30% of female homicides are committed by intimate partners. 5% of male homicides are committed by intimate partners. So how does that translate into, "Women are the real aggressors and men are the real victims?" I'd say we have 200+ cherry picking surveyors out there—Including Media RADAR which sponsored one of the most recent.

Domestic violence is a sin and a crime regardless of who perpetrates it. Just because the facts reveal males are more likely to commit violent crimes than females does not mean we need to allow this thing to degenerate into an all out gender war—which it has, and which Eagle Forum, apparently with great enthusiasm, has enlisted in.

I was so disappointed to see that, within the evangelical community, the voice of Phyllis Schlafly has been one of the loudest in contributing to the oppression of women by attempting to refute the claims of those experiencing violence and abuse.
I beg you to reconsider your position. The facts simply do not back it up.

Abuse and Domestic violence are destroyers not only of families, but of physical lives as well. Yet you continue to lump most women who claim to be victims of domestic violence in the "radical feminist" camp, while advocating for male supremists who masquerade (poorly) as "pro-family" advocates—and spend much time (along with non-profit dollars) attempting to debunk the claim that millions of American women (and by extension entire families) are affected adversely by domestic violence.

Do these detractors have a leg to stand on? According to The Department of Justice, they do not. Statistics show that 1 in 3 households are effected by domestic violence.

How many "households" are there in the United States? According to the census bureau, the 2007 estimate was well over 111 million households in this country (they project 115 million by the year 2010).
Do the math.

Multiple millions of people are effected by domestic violence, and according to Department of Justice statistics, most of the direct recipients of the violence are women.

Yet in spite of overwhelming evidence proving that abuse and domestic violence are a real danger to women and children in this country (and yes, even among professing evangelical Christians), you have repeatedly made public appearances on behalf of men and organizations that go to great lengths in attempting to convince the American public and our leaders otherwise.

You appeared on Glenn Sack's radio program. Glenn Sacks is a male supremist who is at least honest about the fact that he is only interested in advocating for men. But "pro-family" cannot even begin to describe his agenda. What in the world were you doing there?

You have appeared with leaders of ACFC and Media RADAR in advocating their cause. And you have interviewed them as guests on your radio program. You have lent the tremendous influence Eagle Forum wields in a big way to a bad cause.

And the end is not in sight. According to the Eagle Forum website, you plan to put Stephen Baskerville, president of the American Coalition of Fathers and Children (ACFC) behind the podium at your next Leadership Conference. He will be there promoting his book, TAKEN INTO CUSTODY, which Eagle Forum endorses.

It is a fact that family court injustices happen to good fathers and mothers. There are both men and women who will abuse both children and the legal system for their own wicked ends. But men like Baskerville, push for shared custody while falsely blaming mothers for deliberately slicing fathers out of the picture in areas of child custody. Mothers are accused of turning children against their fathers while fraudulently claiming abuse or domestic violence.

Stephen Baskerville’s position is fundamentally skewed—based as it is upon a false premise. I have met and briefly spoken with Joyanna Silberg, Ph.D., the coordinator of Trauma Disorder Services for Children at Sheppard Pratt Hospital in Baltimore, Maryland. Dr. Silberg has extensive training and experience in the areas of child custody and false accusations. She does not agree that shared custody is good for children. Nor does her experience reveal that most accusations of abuse in custody cases are false.

Any honest, thinking, person can see that the family court system is in desperate need of reform and also that it is not pro-family. But neither are the men in these so-called "family / father's rights" groups pro-family. These groups occupy acres of web-real estate in which they teach each other how to successfully use the legal systems against the mothers of their children. It is absolutely evil.

I have personally met and spoken with both Wendy Titelman and Jonea Schillaci, mothers who, with overwhelming legal evidence attesting to their former husband's sexual abuse of their daughters, not only lost custody of their children to the abusive parent, but lost their children altogether. Wendy Titelman is permitted to have zero contact with her daughters (she has not seen them in years), and I believe Jonea is allowed brief, infrequent, "supervised" visits. It is an absolute outrage. It is a legal atrocity. And the list does not even begin to stop with these two.

I am having a difficult time comprehending how you can continue to ignore such overwhelming evidence that it is protective parents (both male and female—but mostly female) who are suffering blatant discrimination in the family courts—largely due to the application of the late Richard Gardner’s PARENTAL ALIENATION SYNDROME (PAS) to any case where a child or mother claims abuse has taken place at the hands of the father. PAS is not endorsed by the APA, it is junk science, and the man who has managed to hold sway in so many family courts through his prolific writing (and financial backing) has committed suicide—by stabbing himself to death. And his writings should be used to teach family court judges, social workers and custody evaluators about mental and emotional health? In addition to this, the man was a pedophile. His public statements and writings attest to this fact—I refer you to The Leadership Council, in which Dr. Joyanna Silberg is vice president, which provides documentation of Gardner's pedophilic statements and writings. Before his suicide, Gardner stated that he felt our culture seriously overreacts to the crime of pedophilia.

The organizations Eagle Forum is now endorsing, ACFC and Media RADAR, all promote Richard Gardner and his writings.

Why, instead of defending men who deny abuse happens as frequently as it does, and who use the writings of a pedophile to back their case, when the statistics prove otherwise—are you not defending protective parents, who include large numbers of women who have been battered and children who are being given to parents who are abusing and/or molesting them? These claims are not the rantings of hysterical feminists as you so loudly and repeatedly proclaim—these things are indeed happening.

I wish I could continue to consider Eagle Forum a PRO-FAMILY organization, but in light of your continued refusal to acknowledge obvious facts and public endorsement of individuals and organizations who are blatantly anti-family, I regret that I can no longer do so.
Posted by Jocelyn Andersen

I think its a good letter, but I doubt she will pay attention. I mean here is a woman that doesn't feel equal rights amendment did anything for women. Equal rights are needed, and didn't do women any favors. Sighhhh!

I listened to some interviews online with her today and yesterday.

Here is a woman that states that she has never known a man that would strike a woman. She goes on to say if you know women that have been beat by their spouse - you seriously need to reconsider your class of friends.

She is also someone that thinks emotional, verbal abuse is 'forgeting to buy their birthday present' and then giggles at the silliness of it. Gasping at the thought that women would LEAVE under such completely insane reasons like that!

She says in interviews that the purpose of marriage is sex, and you give the license to have it once you get married. Rape is just something to be lied about, because that isn't possible within marriage. Your rights in that realm are not existant due to the marriage license.

She got protested recently due to a college wishing to give her an honorary degree, and blew it off during an interview on TV stating she isn't worried about 30 people compared to the size of the class. I wonder what she felt when alot more than 30 had armbands on protesting her presense, people turning their backs to her, and facilty walking off the stage when she came to receive her degree.

I feel sorry for this woman personally. She is so lost, and I'm sorry to say she won't be doing the men much good having her on their team. She can't even grasp the reality of the issue - why endorse her? Do they seriously think she grasps their's any better? She can't be their friend for one - I mean she may have to question her class of friends! If she isn't a friend...what is she? If she can be their friend, and can't be one to a legimate battered woman ... where is her logic?

She is truly a lost soul.

Thanks for the comments and for the link, Hannah. Unfortunately for us, Phyllis Schlafly is a highly respected activist and has a huge following among evangelicals.

If you know women that have been beaten by their husbands, you seriously need to reconsider your class of friends??! That's callous 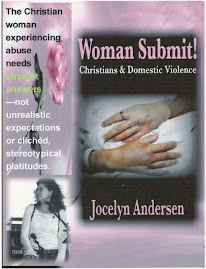